Skydiving in Macedonia – Cozy but Fun

Aeroclub Skopje is the place to be if you’re planning on skydiving in Macedonia. It is actually the only place for us to go Skydiving in the country, but hey, we are not complaining.

A little bit of History – Breaking away from Yugoslavia

The country of Macedonia has been struggling with maintaining its air sports tradition since Yugoslavia fell apart (1980) and the Aero Clubs stopped receiving funds from the state.

To explain things in a few words – In the Yugoslavia regime, the only way to develop yourself as a skydiver was to join the special military units as a Parachutist. 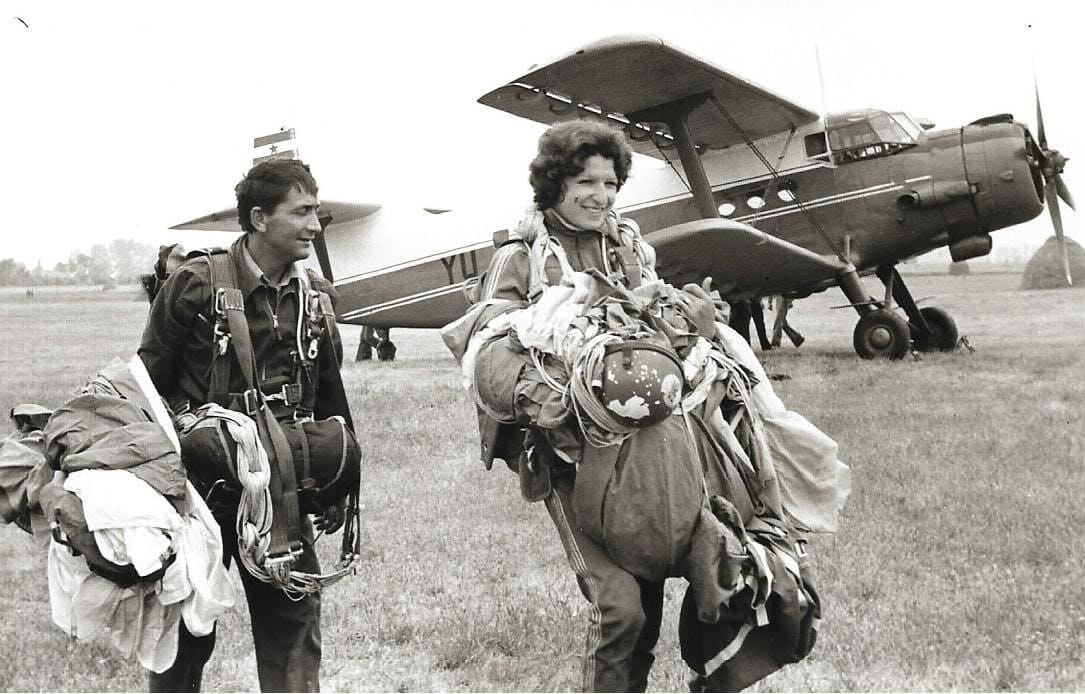 People that became Skydivers this way had regular training sessions that were sponsored by the state. It wasn’t out of the ordinary for the military to organize National Skydiving Championships. 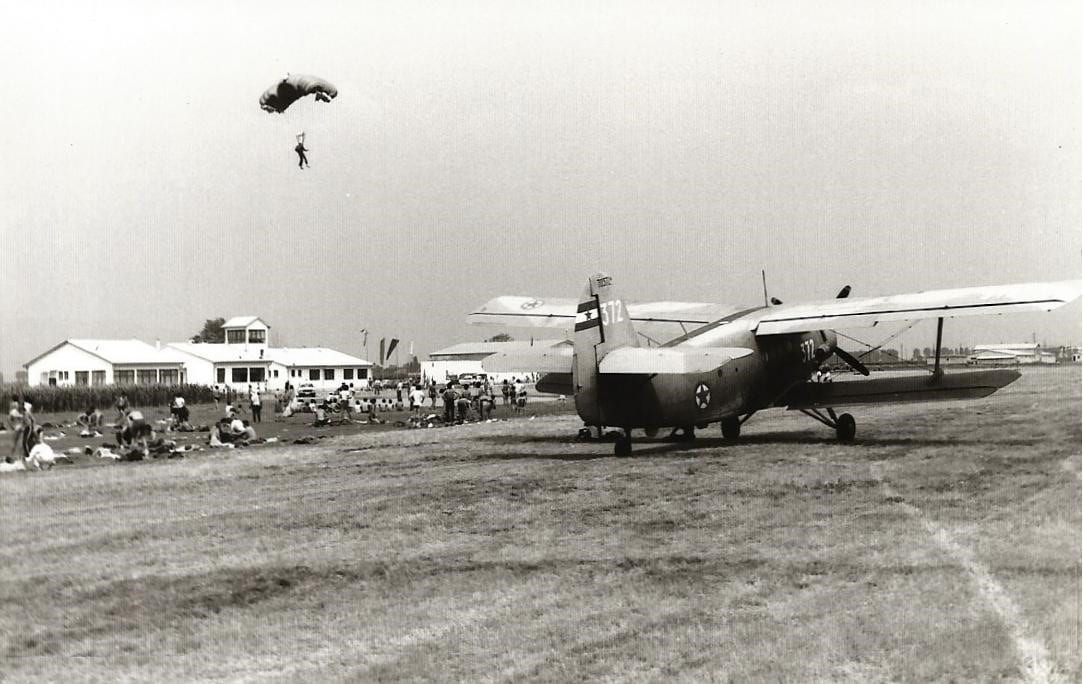 After Yugoslavia fell apart most of the Skydivers continued enjoying free fall, and most of our senior skydivers today were trained in the Yugoslavia regime. 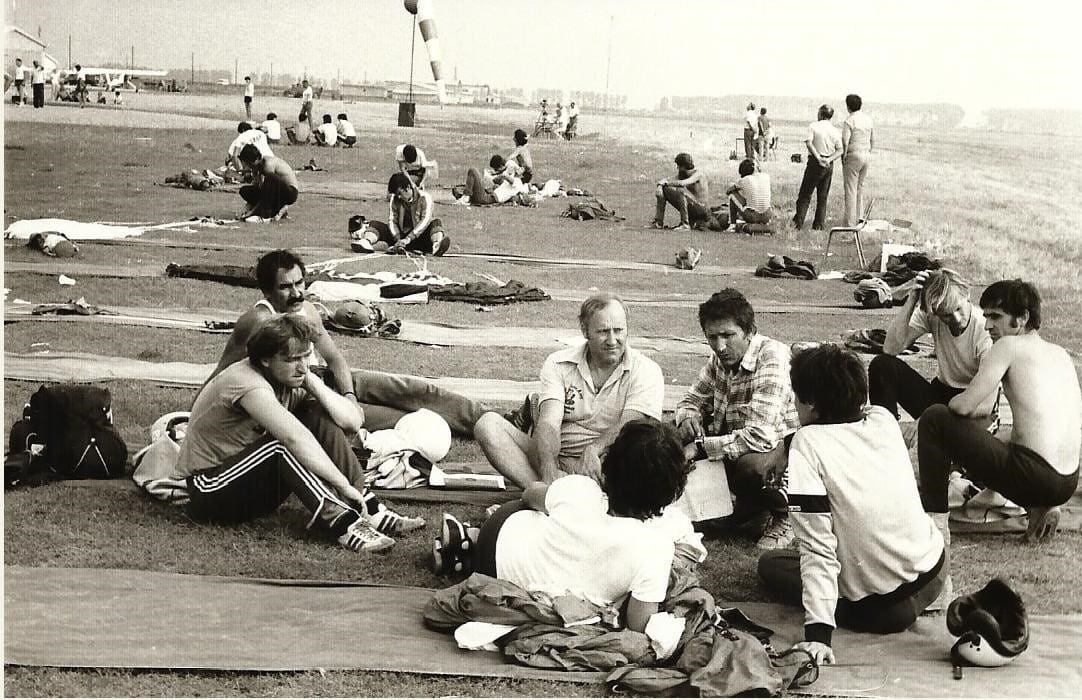 The only place in Macedonia that offers Skydiving today is the Aero Club Skopje, which also holds the name of our capital city. The sports airport has been recently renovated and one could say it is the most successful, out of the 5 Aero Clubs working in the country.

It was founded in 1923, and the people that run it today live, eat and breathe aviation 24 hours a day, every day of the year.

The team at the airport consists of life-long friends that either work there or come to visit every weekend.

The airport offers a safe haven for air pilots and their families. It is away from the hustle and bustle of the city, but still close enough for everyone’s transportation purposes.

On weekends and holidays, the airport fills with Aeromodellers, Skydivers, Pilots, their partners, and children.

We love going there no matter the occasion, but we feel the happiest if it’s a Skydiving day.

At the moment we’re using the Cessna 182H Sky lane for Skydiving which is an American four-seat. With the seats removed, it gathers the pilot and 4 skydivers inside.

It can get a bit snug in the airplane, but you don’t mind it in the same way you would mind a lack of personal space in public transport. Everyone inside the airplane is focused on controlling the adrenaline rush, so personal space ceases to present an issue.

Also, since we know it is the only plane we have for our Skydiving purposes, we truly love our Cessna and care about it the same way you would care about your only pair of glasses.

How we organize jumps

Most of the jumps are planned spontaneously. We have a Parachuting Group on Viber, and Facebook where we send skydiving related news to each other.

Anyone can initiate a jump for the next weekend, and if they manage to get a group of at least 4 people for the day the jump is set.

Although all of us are social beings, and we love to socialize, getting a group to go skydiving is also necessary out of financial reasons.

In a country where the average monthly salary is 300-400 euros, it is truly magical to be able to provide funds for skydiving. 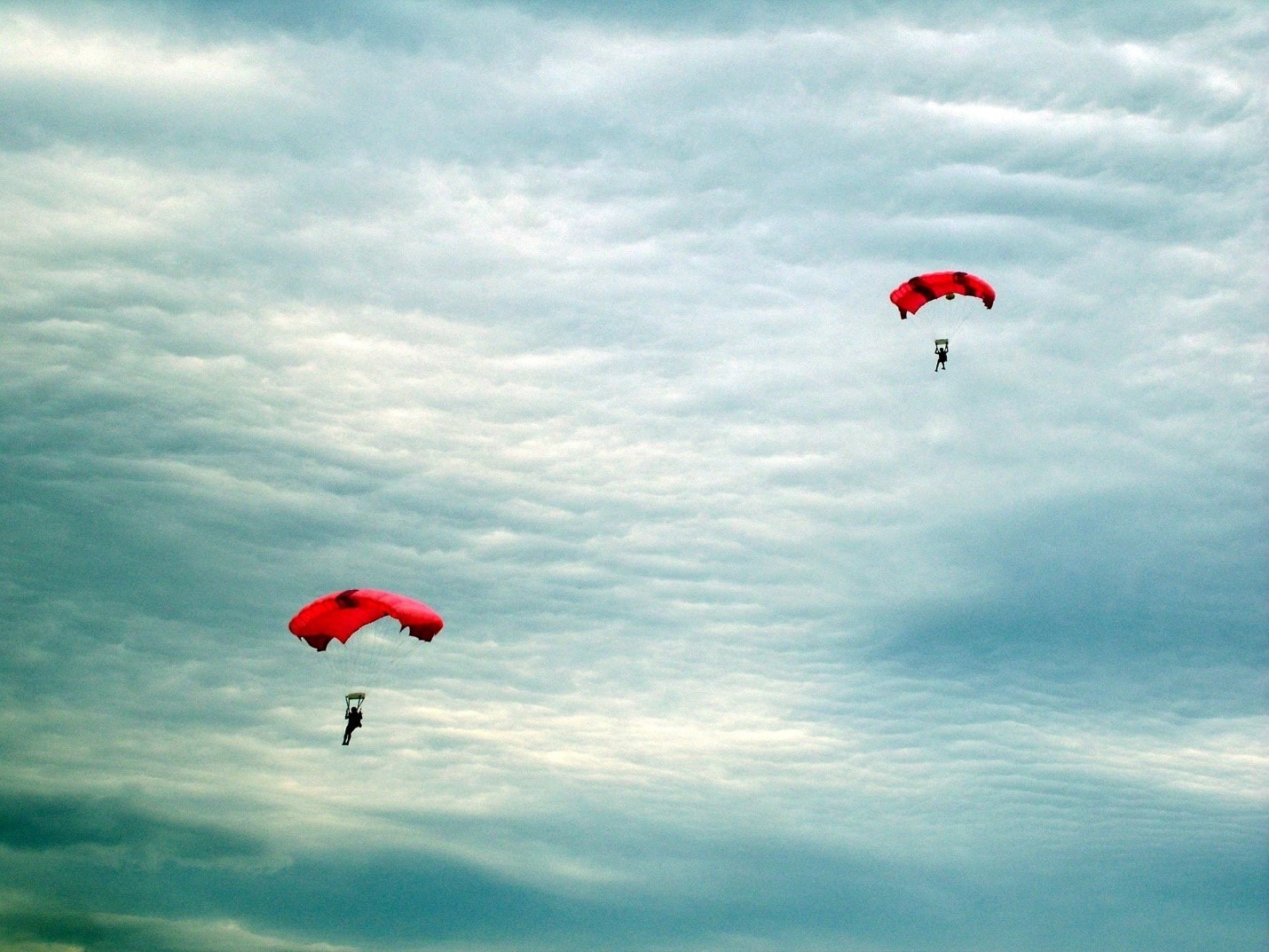 Once we do have a group of 4 we set a day and a time, and then the real fun begins. The sooner you know you’ll be jumping, the sooner you can start getting excited.

In my experience, it’s not just about the jump itself that makes the event so exciting, but the people you jump with – your skydiving team.

In my case, everyone was more than cool, and a pleasure to be around. 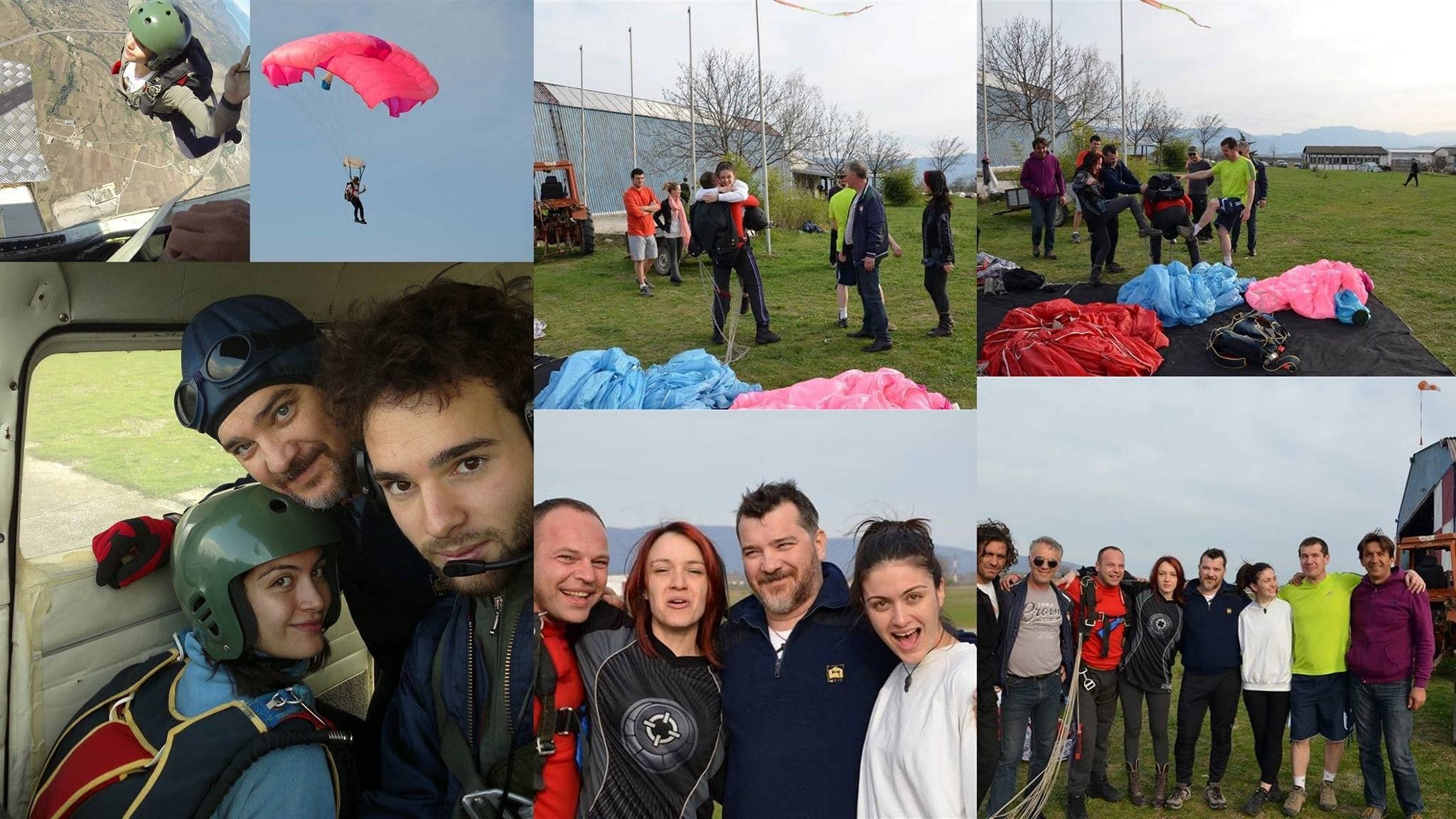 The Morning of the jump

I even made a playlist of skydiving songs that hypes me up even more.

We usually gather at 6 am at the airport, which is embarrassingly early to me, but hey, I’m not complaining when it comes to this cause.

It is obligatory to have a cup of tea or coffee, prepared by the airports super, and then we get down to business. We run a bit around the airport and do some light exercises to get our system up and running.

Beginner skydivers usually pack the parachutes together with the Skydiving instructor.

We always go through some theory as well. The instructor, Jane Stefanov asks us various questions connected to safety, and how we would react to certain unexpected situations in the air. 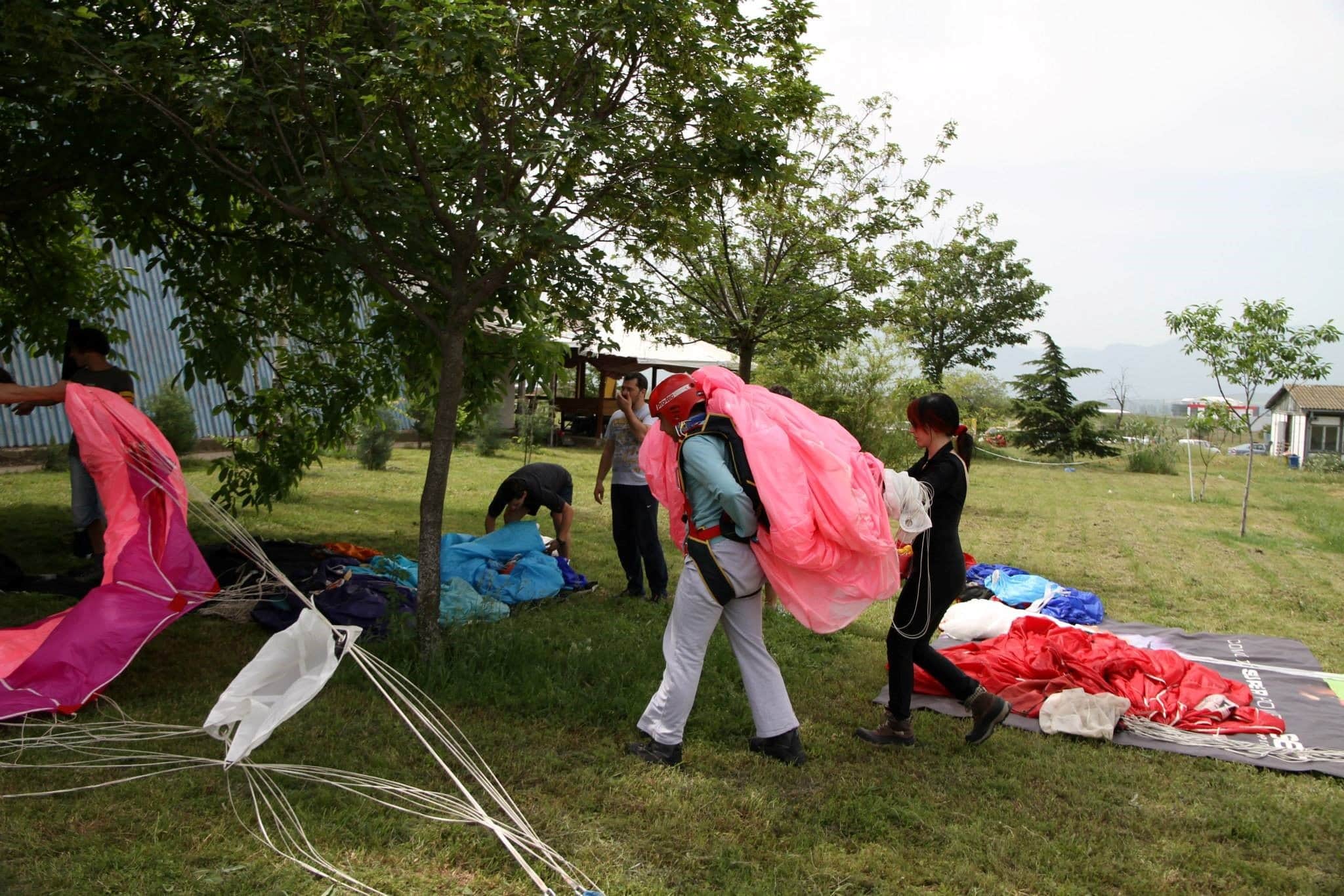 While there is full respect towards the instructor and all the experts at the airport, we still manage to hold a relaxed atmosphere, and there’s always plenty of jokes being passed around.

Once we have our parachutes, helmets, and altimeters on, we proceed towards the airplane. Senior skydivers inspect our equipment one last time to make sure that everything is tucked in, and safe.

The lightest person gets in the airplane first, the heaviest the last.

Once we’re inside the airplane, and it starts rolling down the grassy field, the entire experience suddenly becomes surreal. You’re in for a one-way ride as excited as you can be.

I often get the feeling that everyone inside of the plane is trying to look as relaxed as they can, but you can actually see the excitement on their face. We usually remind each other to arch our backs during freefall or discuss an exit strategy. 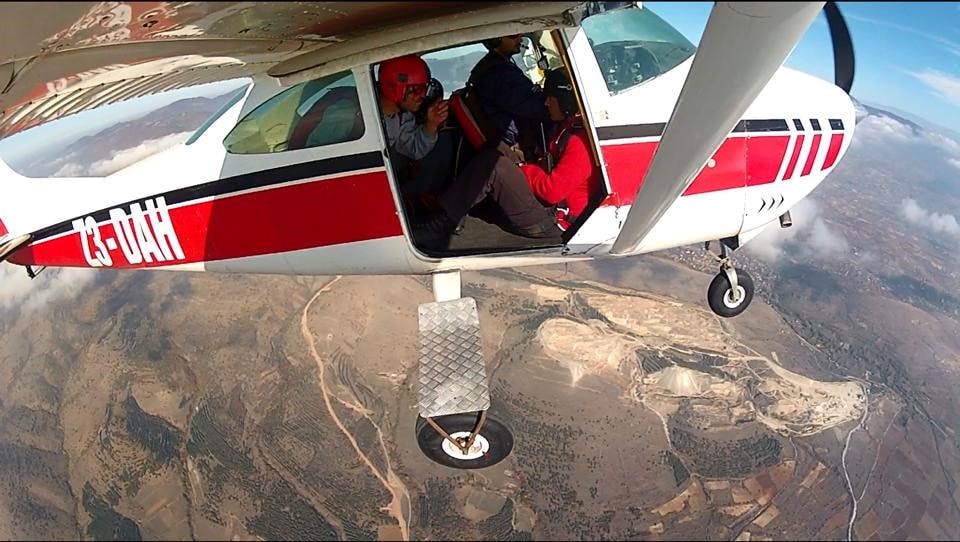 Usually right before we are supposed to jump out we say things like “Man, I needed this so badly.”

It takes us about 15-20 min. to get to up to 1500 meters, and then the instructor opens the door of the airplane and the “fun” can begin. One by one we throw ourselves out of a completely functional airplane, and we LOVE IT.

“We throw ourselves out of a completely functional airplane, and we LOVE IT”

The airplane and freefall over the airport.

We don’t jump straight out of the plane.

There’s a metal plate below the wing that you can stand on, before jumping out.

When you first start Skydiving you get surprised by how strong the wind can be. This is why it is SO important to practice getting out of the airplane on the ground.

So you don’t waste precious moments in the air, struggling where to position your hands and feet. 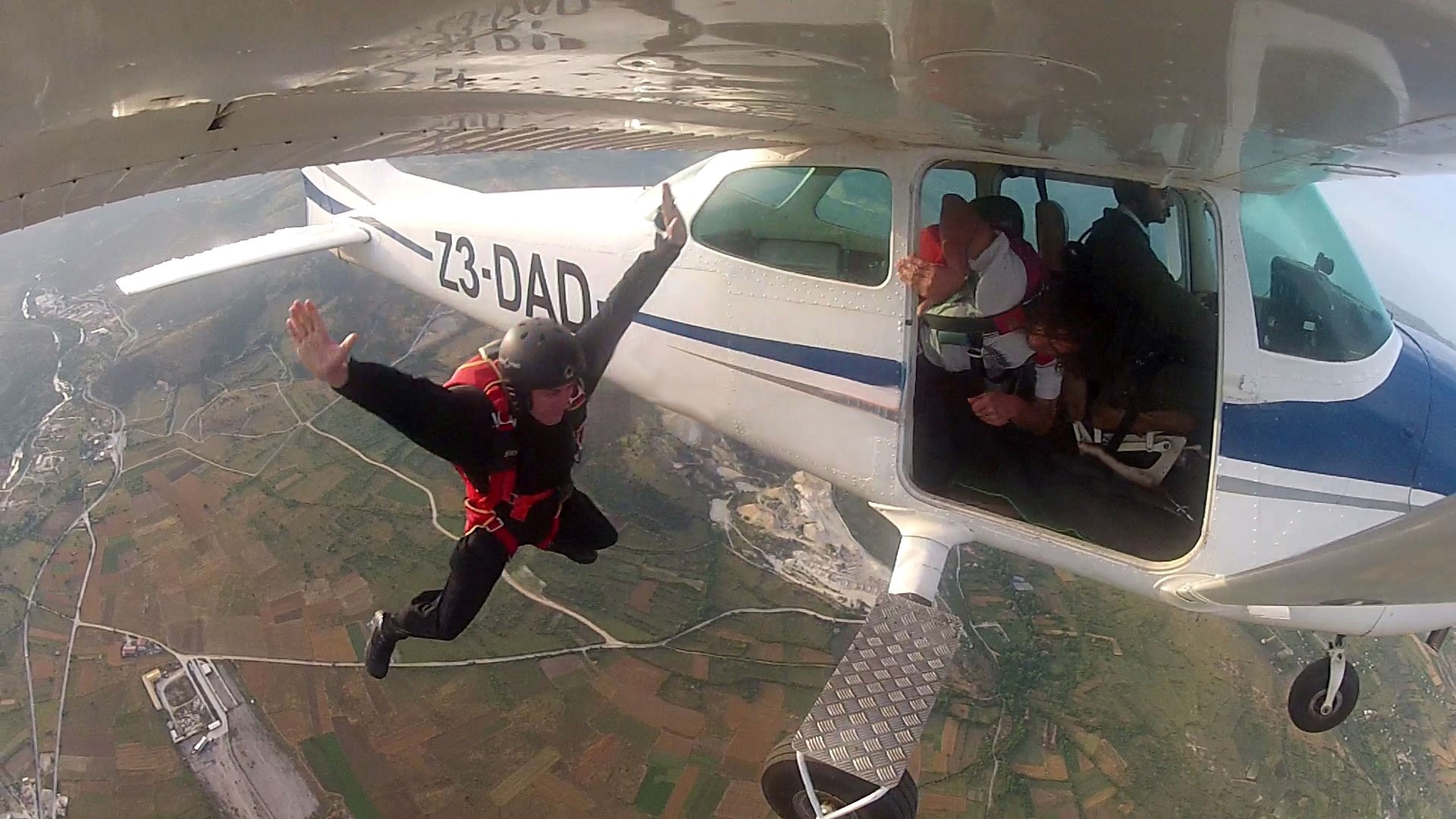 Once we’re on the ground all the instructors gather and talk about our jump and what we did wrong this time. The sooner you’re on the ground the more you’ll get criticized, so some of us started chasing thermal winds to avoid this issue. LOL.

After each jump we always celebrate, either with beer, or a good portion of beans, or both.

For most of our jumps we have a camera on the wing recording everything, so after a day of skydiving we gather and look at the videos. There’s usually plenty of laughter and joking, but also serious conversations and strategies for improvement.

Every once in a while there’s a special occasion that breaks the skydiving “routine”.

We performed skydiving jumps for a wedding that was happening at the airport.

We wrote “Happy Marriage to Dime and Angela” on a piece of paper as well and took a photo inside of the Cessna before the jump.

It really made the day special for the bride and the groom. 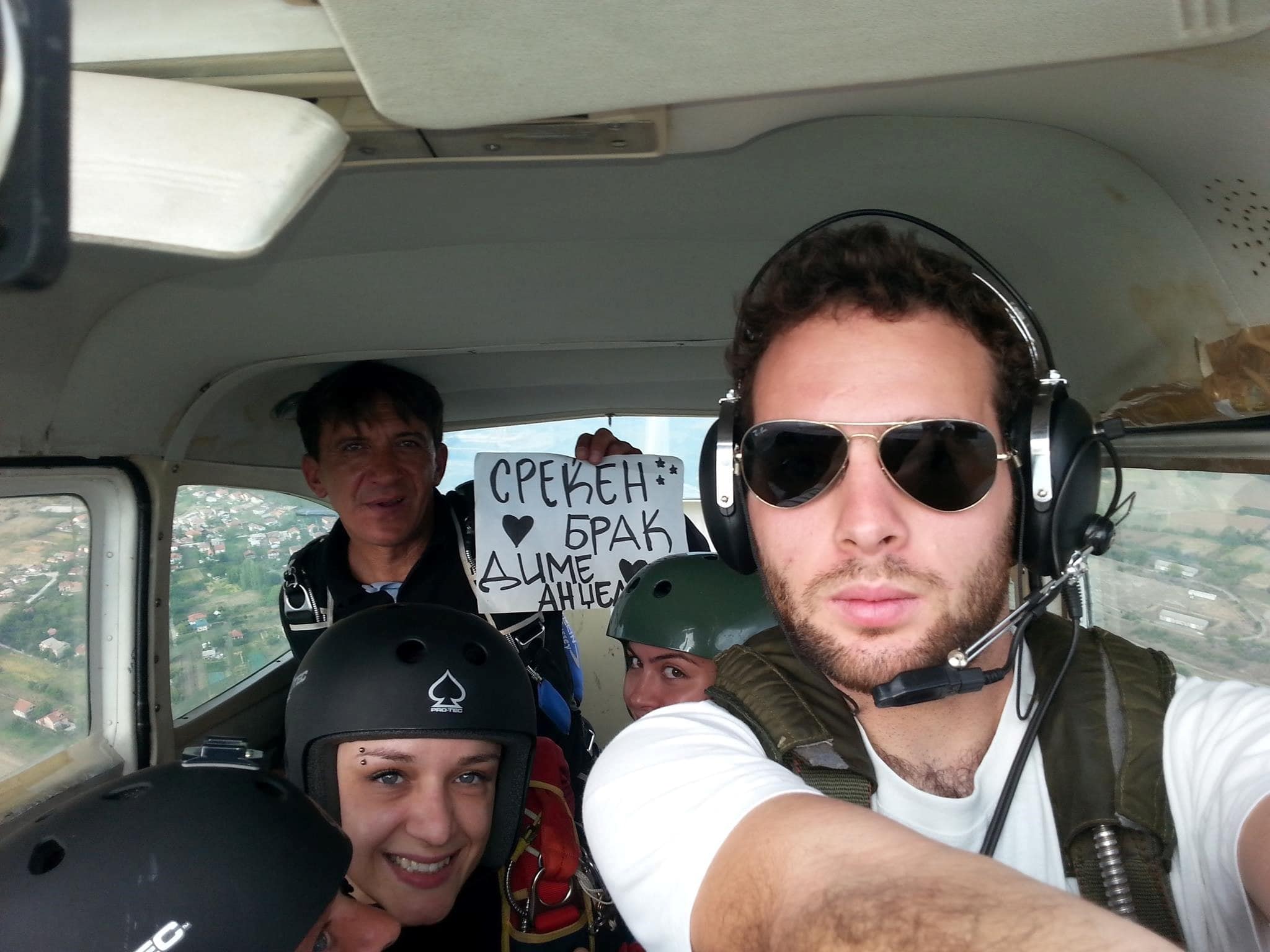 One of my most memorable skydiving experiences was riding outside the airplane, below the wing for almost a minute. 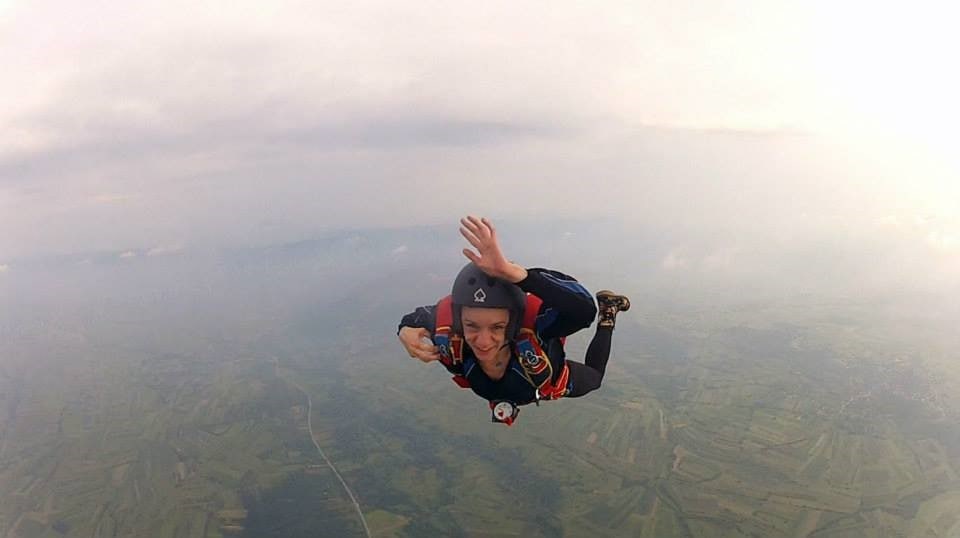 There was a misunderstanding in the plane, where the instructor nodded towards me to start getting ready for the jump.

I thought I needed to get out of the plane and started getting out.

Since it was too early the instructor tried to pull me back in, but he couldn’t do it.

At that moment I have gotten superpowers. Apparently, he also yelled, but the wind snuffed his voice.

In the end, the pilot told him to let me go, because I was going to pull both of us outside. Once I was out below the wing, standing on the metal platform, I remembered our ground exercise and turned my attention toward the instructor.

He was supposed to nod again so I could jump out.

At this point, he was angry and frustrated and screamed: “Well now you get to taxi on the wing.”

So I stood there, outside of the plane for a whole minute, not really sure what was happening, just enjoying the James Bond ride. Once we were on the ground the instructor told me he never wants to hear me complain how strong the winds are up there.

My skydiving instructor currently thinks I could single-handedly pull the plane if I ever decided to.

About the Author: Biljana

Becoming a skydiver, a journalist and a freelancer presented me with the opportunity to become the Secretary-General of the Aeronautical Federation of Macedonia. This gave me a completely new life perspective on all air sports and a chance to create a better environment for all pilots. Managing a federation and working as a freelancer is a challenging task, but it keeps me engaged. And that’s exactly what I need to be while I’m grounded. After being on this planet for 35 years I can safely say that the most important thing in life is finding a way to realize your dreams.